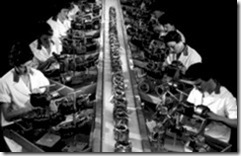 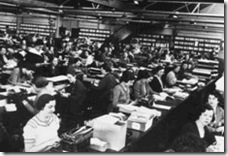 ‘Office Worker Factories’ are on their own deathbed. .

The ‘Industrial Age’ of the 20th century was defined by factories that produced goods at scale. When you mention ‘Industrial’, people think Rust Belt, smokestack, blue-collar engines of manufacturing. But just as prominent to the Industrial Age (probably more so in the final decades) were the ‘Office Worker Factories’. Behemoths of assembly-line processing by white-collared, college educated ‘knowledge workers’. But just as automation and globalisation has displaced most of the Rosie the Riveters, the same forces have now made redundant the legions of Peter the Paper Pushers. Documented in William Whyte’s classic ‘Organization Man’, regimented In and Out Trays worked on synchronised 9-to-5 shifts managed by overseers.

The ‘Service’ economy (eg. finance, information technology, logistics) has long looked down its nose at ‘Manufacturing’ sector as outdated and obsolete. Little did it realise that the Service sector is just Manufacturing’s younger sibling. Now it too has hit its dotage in the Industrial family.

Seth Godin recently penned a post “The forever recession (and the coming revolution)” which dramatically dissected the decline of the staid, fixed, old infrastructure across all sectors of the economy. Clearing the way is the Dynamic new approaches to business…

There are actually two recessions: The first is the cyclical one, the one that inevitably comes and then inevitably goes…The other recession, though, the one with the loss of ‘good factory jobs’ and systemic unemployment–I fear that this recession is here forever. Why do we believe that jobs where we are paid really good money to do work that can be systemized, written in a manual and/or exported are going to come back ever? The internet has squeezed inefficiencies out of many systems, and the ability to move work around, coordinate activity and digitize data all combine to eliminate a wide swath of the jobs the industrial age created…The industrial age, the one that started with the industrial revolution, is fading away. It is no longer the growth engine of the economy and it seems absurd to imagine that great pay for replaceable work is on the horizon.

I'm not a pessimist, though, because the new revolution, the revolution of connection, creates all sorts of new productivity and new opportunities…Most of the wealth created by this revolution doesn't look like a job, not a full time one anyway. When everyone has a laptop and connection to the world, then everyone owns a factory. Instead of coming together physically, we have the ability to come together virtually, to earn attention, to connect labor and resources, to deliver value.

Stressful? Of course it is. No one is trained in how to do this, in how to initiate, to visualize, to solve interesting problems and then deliver. Some see the new work as a hodgepodge of little projects, a pale imitation of a 'real' job. Others realize that this is a platform for a kind of art, a far more level playing field in which owning a factory isn't a birthright for a tiny minority but something that hundreds of millions of people have the chance to do.

This revolution is at least as big as the last one, and the last one changed everything.” 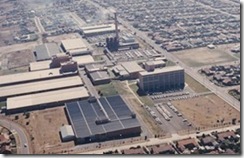 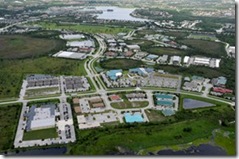