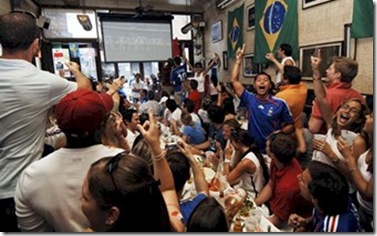 Not all time is created equal.

This reality is the problem with conventional time-motion productivity analysis. Perhaps in the 20th century Industrial Age of the assembly line manufacturing plant and paperwork factories and even a simpler, more routine home life, hours were more consistent. But the hour one spends getting married, watching a child win their first sports game or watching your favourite team in an international competition is not the same as 60 minutes sitting in traffic, sitting in a routine meeting or ploughing through administrative chores.

Unfortunately, most workers usually do not have a corresponding ability to bid for time off.  The problem is more difficult with exempt workers. They are paid a fixed salary and can be almost an implicit assumption that ‘all time’ is the company’s time (depending on the culture).

While the grand spectacle of the World Cup has given rise to a bunch of reports of ‘lost productivity’ fear mongering amongst the chattering fourth estate. “World Cup Could Cost UK £4 Billion” Most of these attention grabbing articles are based on out-dated logic that an hour is an hour. That people will find ways to watch the games, the games are during conventional work hours, ergo time is lost and time is money so money is lost.

More enlightened and innovative companies are using the World Cup to introduce some special work practices and bonuses to its workers like Asda and Screwfix. One of Microsoft’s leading partners and winner of the UK Best Place to Work 2010, Softcat, is showing how it is done by hosting World Cup viewing parties in their offices. No one is skiving off work today at Softcat! (and probably hardly ever do with that kind of enlightened approach).

Businesses should be looking at the World Cup as the least expensive staff morale opportunity to come along. Because fans will highly value their time watching the games above all else, they will value the hour given to them much more than the hour of elapsed clock time actually costs the company.

A classic win-win. Just like the England-USA 1-1 result for me as a UK-USA dual citizen. Perfect.

While Dynamic Work can entail flexibility of many forms, one of the most prevalent is ‘Geographic’ mobility. One of the major constraints to such mobility is simply lugging stuff. If you have heavy tools you depend on, it is sometimes easier for you to go to the tools than for the tools to go with you. The electronics miniaturisation revolution (laptops, notebooks, PDAs, phones) has obviously been the primary enabler to greater mobility. But now workers are moving from carpal tunnel syndrome to sore backs carting heaving backpacks and computer bags.

For this challenge and others (eg. tighter restrictions on what travellers can carry on planes), I had always thought that a great business proposition would be somewhere that just sold the smallest versions of everything. To me, ‘small’ and ‘lightweight’ are increasingly critical USPs in an increasingly mobile world. As I investigated the area, I came upon an outfit that was inspired by the same vision and have executed it brilliantly – Minimus. While a number of online e-tailers carry some travel sized items and dabble in this concept, Minimus is the world leader by far with over 2000 products on offer and a range of services.

So impressed was I over Minimus that I got in touch with their founder and CEO Paul Shrater to learn more about the business. We shared similar visions and business approaches and the conversation has evolved into a partnership. While Minimus is strong in the US market, it has not really done much overseas especially due to the high costs of logistics and shipping. As a result, Dynamic Work has signed on to be Minimus’ agent and representative overseas to assist with a number of opportunities that have been presented to them.

If hauling your bag around is one of the considerations keeping you office bound, then have a look at www.minimus.biz for some great fixes to that problem.