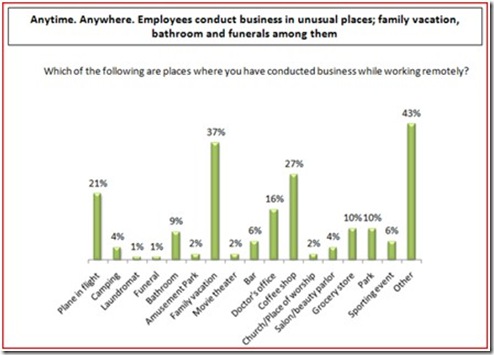 …They’re all great place to work.  A least according to a recent study by Microsoft on the productivity impacts of telecommuting (as I happen to be recently speaking of Microsoft and ‘Great Places to Work)’…

“Sixty percent of respondents to the Microsoft Telework survey — conducted among 3,600 employees in 36 cities nationwide — say they are actually more productive and efficient when working remotely. With less time spent commuting and fewer cubicle “drive bys” causing distractions, respondents say, more time can be spent on the task in front of them. The catch? By and large, employers aren’t catching on. Only 41 percent of those surveyed work for companies with established remote-working policies, and just 15 percent believe their company supports flexible work arrangements. Despite a wealth of new technologies that can facilitate collaboration among workers no matter where they are, employers are still concerned about whether they’re getting the most from employees. “

The study also included a list of the Top Ten USA cities for Telecommuting (Boston, Raleigh-Durham, Atlanta, Denver, Kansas City, Richmond, Austin, New York, Sacramento, Portland). But the ‘places’ best suited for telecommuting that intrigued me the most were the types of locales people chose to work in. First, the number one selection was ‘Other’ (43%) which combined with the variety of the other 16 top mentions (eg. laundromat, camping, doctor’s office, salon, movie theatre) underscored just how diverse the possibilities are. Secondly, the next highest selection was ‘Family Vacation’. Especially when combined with so many of the other mentions (eg. funeral, amusement park) undermines the fear of so many employers and bosses (specifically called out in the report…see quote above) that staff working remotely will shirk work. Conversely, it seems like it introduces work into whole new parts of the staffer’s life. Now that might eventually create its own problem, but that problem is ‘too much’ working not ‘too little’. If the employers want to get concerned about ‘too much’ working and focus attentions on addressing that issue, then that is an entirely different matter.