Fellow UK work innovation evangelist Katie Ledger forwarded me another gem, this time a piece on ‘The Future of Offices’ by Paul Warner, Chair of the British Council for Offices Urban Affairs Committee and Research Director at 3D Reid. A well composed and authoritative piece supporting pretty much all of the tenets and principles of Dynamic Work. Here are a few choice excerpts…

“The future workplace will be the opposite [of] the ‘city as office’. Companies will downsize their property footprints and make use of city-centre facilities that are publicly available – coffee shops, restaurants, pubs, city parks, library reading rooms. Why add millions to the cost of your office scheme to build a boardroom used once a month when you can simply book a private room in a grand hotel every month two years in advance? Why worry about the limits of technology when the city is itself covered by a wireless network? The most amenable, attractive and convenient place for people to meet is usually the centre of the city, so we can look forward to an urban consolidation of office property after decades of out-of-town developments and suburban hubs.”

“Flexibility is the key to future office development and a move away from the tailor-made shell to a more robust and generous building type that can sit within a ‘spatial plan’ (that includes transport, density and mix parameters). As people work in patterns that are more flexible and fluid, serendipity within the city and the chance encounter seem hopeful and exciting.” 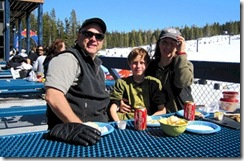 When you start to talk to people about Dynamic Work, people tend to jump to thinking about it as either ‘home working’ or maybe ‘flexi-time’ which are relatively familiar concepts. But actually, those examples only illustrate 2 of the 4 ‘Flexibility’ dimensions to Dynamic Work, namely Geography and Time. The other two – Role and Commercials are less familiar. The Wall Street Journal’s recent piece on ‘Furlough Fridays’ is a great example of Commercial (ie.  terms of remuneration and reward) flexibility that can be a win-win for staff and organisations alike.

“This is ‘Furlough Friday’ and it’s becoming a staple around the country as state governments force workers to take a weekly day off—usually Friday—to help bridge budget gaps. The loss of a day’s work, and as much as 15% of a worker’s pay, is forcing families to tighten their belts. California Gov. Arnold Schwarzenegger has put state workers on Friday furloughs since February 2009 and most furloughs are expected to persist as long as July.”

“Friday furloughs are producing an unexpected dividend for many of these workers: Marketers have discovered them. The Boreal ski area near Lake Tahoe offers a ‘Frickin’ Friday’ $15 ticket for furloughed California employees; the normal adult lift price is $47. Don Hutchens, a state highway contractor, said it cost only $30 for him and his wife to snowboard all day while their young son and a friend did so for free. ‘It’s the best deal in town,’ said a smiling Mr. Hutchens, as he toted his board to the parking lot. ‘You can’t beat it.’ “

The danger with ‘Furlough Fridays’ is that when combined with Friday becoming a day of choice for ‘Work From Home’, bosses (and staff themselves) could confuse those with the day truly off and those who are supposed to be getting in productive work. Already many bosses consider ‘Work From Home’ Fridays as ‘Shirk From Home’ and lots of people on the ski slopes could mistakenly reinforce that perception.

As Dynamic Work evangelises jettisoning fixed office spaces to save money, carbon and productivity, I get two very typical responses…

The website not only provides helpful information, but primarily serves as a matchmaking service for companies shedding space (perhaps inspired by Dynamic Work cost cutting) with people looking for space. One major constituency for the latter would be the increasingly mobile and distributed workforces on the landscape. While business centres are cropping up rapidly, London New Enterprise could be the linchpin for even more expansion in this type of commercial space.