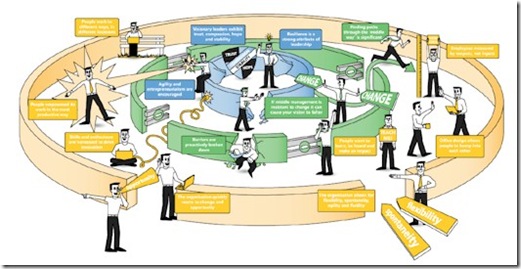 The bigger they are, the harder they toil.

That’s the finding of a recent study into workplace practices by Microsoft UK’s ‘Hybrid Organisation’ initiative.

“The study revealed that even though the majority of office workers want to work more flexibly, the larger the organisation, the less likely its employees are enabled to do so. Half of the people participating in the study said they lacked access to the most basic technology tools that would enable them to work away from the office.”

I found in my year working on Dynamic Work Ltd that the sweet-spot was organisations around 1,000 staff. Upper middle market. As the Vanson Bourne study highlights, the smaller companies do a pretty good job themselves of incorporating new and flexible ways of working. On the other hand, I found that large enterprises (ie. thousands of staff) simply had too much bureaucracy, legacy, complexity and inertia to get substantive innovations in the workplace moving.

Ironically, at the same time that Microsoft announced the advantages to changing business practices, especially when enabled by IT, it also announced that it was retiring the ‘Business Value Productivity’ service. When I left Microsoft to start ‘Dynamic Work Limited’, my biggest impetus was the opportunity that these BVPS services (provided by partners such as I was setting Dynamic Work Ltd to be) presented. Not only did I feel strongly about the ‘New World of Work’ principles, but I felt that the Business Value coupons would really motivate and help companies to make bold steps in these directions. Conversely, one of the big reasons I chose to discontinue with Dynamic Work Limited commercially (though I continue to do writing and activism like I am doing right here and now), was the eventual realisation that Microsoft was neither supporting the New World of Work initiative nor the Business Value services. These initiatives were brochureware to adorn their websites and and keynotes.

The report has some valid research that provides helpful data points for people trying to make a business case for more dynamic working. Some fine case studies of the likes of Macquarie Bank, Nuffield Health and GlaxoSmithKline. It also features some useful models such as the ‘Follow Me Organisation’ and the ‘Bump Organisation’. Unfortunately, given Microsoft’s erratic track record in this area, the piece itself smacks of being little more than a PR exercise for Microsoft rather than heartfelt or inspired innovation.

Last week’s Dilbert cartoon highlights a common misconception about Dynamic Work. The notion that changes mean a loss of something when in reality, when done properly, it introduces the addition of something.

You get the same reaction about introducing home or remote working. People fear that they will lose the camaraderie and serendipity of the office. But, again, Dynamic Work, means adding remote working space to centralised hub working space. There might be less space overall because the choice introduces a big efficiency. But people still have the best of both worlds – a place to hook up and meet face to face, and the options to ‘get away’.

The strip does highlight that there are no silver bullet solutions to workplace design. Only a holistic approach can get the right balance of resources and practices.