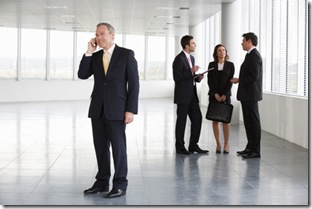 I was describing the concepts behind ‘Dynamic Work’ at an event last week and one of the attendees described it as an ‘anti-neutron bomb.’

The ‘neutron bomb’ was a concept floated in the seventies as a military weapon which killed people, but left buildings and structures standing. The term was quickly characterised as a paragon of the inhumanity of war and mankind’s values. The term was most prominently popularised applied to ‘Jack Welch’ whose aggressive manpower reductions and layoffs led to the nickname ‘Neutron Jack’.

By contrast, ‘Dynamic Work’ gets rid of buildings and structures and leaves the people. As my friend Lindsay Hamilton described, ‘you help companies layoff building instead of people.’

‘People-friendly’ downsizing if you will. Just the ticket for a difficult economic times where production often needs to be scaled back, but unemployment is already enough of a problem and one we don’t want to aggravate further. I guess if Jack Welch’s moniker was ‘Neutron Jack’, then my aspiration would be to earn the name ‘Anti-Neutron Bruce’ (curiously, the ‘anti-neutron’ particle was discovered by a guy named ‘Bruce’).

One of my first posts was on the topic of ‘Where We Are Available’. It focused on the ‘geographic’ side of flexibility and the tools needed to bring people together for collaborating in an efficient manner. In the little over a year since that post, the principles of ‘where we are available’ have risen in prominence across a number of social media.

The Twitter ‘status update’ is one of the most popular uses for Twitter.  Updates on where people are delivered with the immediacy of the Twitter medium entails a chance for connected (‘following’, ‘friends’) individuals to connect geographically.  What it lacks in integration (with standard collaboration and calendaring like Outlook and Exchange) it gains in immediacy and convenience.  People like Hugh MacLeod are actively exploiting which quality to prompt impromptu real-world connections and face-to-face meetings.  One of the big criticisms of distributed working is that one loses out on the ‘serendipity’ of people bumping into each other in the hallway or at the water cooler.  But exploiting Twitter in this fashion demonstrates how new tools can actually expand ones potential for serendipity and actively foster it in distributed working mode.

The most logical question after encouraging one to abandon one’s fixed office space, if the public venues like cafes and libraries don’t suit one’s taste and maybe ‘home working’ doesn’t quite suit, then ‘Where can I work?’

The fact is that business centres and clubs are cropping up all over the UK and especially London is a variety of designs and packages to suit almost any work style or budget. Here are just a few to come to my attention in recent weeks…

One useful resource for navigating and locating an appropriate business centre is the Business Centre Association. Quotes the website, “There are around 860 bca flexible managed space member locations across the UK, providing over 40 million sq ft of office space to 40,000 SME-sized business occupiers making use of 500,000 workstations.” In particular, their Map View centre finder is a great tool for finding a business centre near where you happen to be.