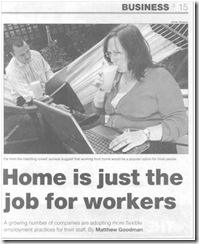 A little while back The Sunday Times did great piece on remote and flexible working: “Home is just the job for workers” (subtitled ‘A growing number of companies are adopting more flexible employment practices for their staff”)

It highlighted the aggressive strides that companies like BT, My Travel, Lloyds TSB and HSBC were making to exploit this new approach to working.

As head of BT Workstyle, the division of the telecoms group that sells equipment and technology to other large corporations wanting to get their own employees geared up for home working, Dunbar is something of a zealot. Since 1988, he has worked from a purpose-built shed in his back garden, and likes to joke that his daily commute is about ten seconds – two when it’s raining. It might sound eccentric, but Dunbar’s working practices are becoming the norm for thousands of British workers attempting to achieve a far healthier balance between their careers and their home lives than they might have otherwise enjoyed…[A] number of big British companies are shifting more staff over to home working. At BT, for example, a little over 13,000 of the group’s staff have decided to take this option.”

And echoing my post ‘First Kill All the Office Buildings’…

“Michael Geoghegan, chief executive of HSBC, Britain’s biggest bank, threw his weight firmly behind a drive to remove 4,000 of his London-based staff from the group’s Canary Wharf headquarters and get them working from home instead. Speaking at a conference in Lisbon, Geoghegan said: “I’ve challenged us within seven years to have 50% of that building empty, to sublet to someone else. I don’t think we’re a really progressive, perceptive company if 8,000 people have to get up every day at an unearthly hour and go back again. Technology should change our thought process.”